Hey, Sweethearts, we hope you’re doing well, here’s where we are at.

The sister left Friday morning for a few days. Before she left she gave “her brother” a hug and said “I miss my brother, I wish he’d come back”. GOD thought about that after she left and said “I don’t get it, it’s like she’s two different people”. Is the sister a demon? Yes and no. She’s carrying one inside her who surfaces from time to time. This is more common then people know of. There are more demons than humans occupying human beings but that’s not important right now.

Saturday morning GOD woke up with chest pains, I told him to slow down and eat something. We had the house to ourselves until yesterday, so we were able to relax. During that time he eat and drank some food and water which gave him some strength to allow me to communicate with him, which has not been easy lately. He’s still in the negatives, but now he’s able to walk. The niece intervened and got rid of the dog yesterday, but we’re still not staying here. This morning I fed him something, but he has no intentions of eating again. He felt the start of that headache last night, which is good, because now he can identify it as that headache and not as a regular headache. He’s ready to cancel our case with DSS and walk out of here, I told him to wait, we can finish this here, he just needs to get into that “zone”.

Over the weekend he learned that Alex’s name is in fact Victori, not “Nike, the goddesss of Victory”, that’s just more made up nonsense. He also learned that his name is GOD, which is the pronounced acronym for “Generator Of Data”. He hasn’t gone by that name in a long long time. The name VON came from our first Son, who has also been gone for a long long time. GOD doesn’t hold a grudge, he gets even. Victori and I will no longer refer to my husband as “VON”, we will call him GOD, because that’s who he is. He still won’t use that name until he has undeniable proof that he is “that guy”, so if he should write a post to you, Kiddo, he might sign it “VON”. Or he might sign it “GOD”, depending on when he writes it.

The other day we watched a video about the paranormal, it told of a YT channel called “Who ghost there?”, so he investigated the channel. He saw that the channel’s creators have an interest in “orbs”, so he shared a link;

The next day we got a reply from that channel; 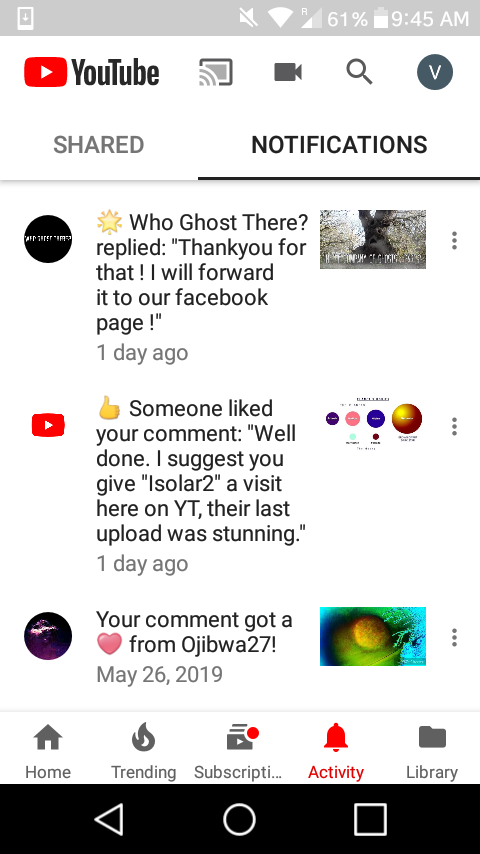 Last Friday around midnight we heard a car pull into the second driveway outside the spare room’s window. We looked outside but couldn’t see anything, so we closed the window and went to sleep. The next day we looked out that window and saw where someone walked through the weeds right up to the window. You can still see the path they left.

When my husband says he’s done, he’s done. I know his wanting to leave here is not him threatening me to exit him, that I know. I need him at a certain spot for us to exit him, he needs to be physically weak, dehydrated and outside, that headache which is at bay is his signal to go outside, that’s how he’ll know when. He had a touch of it last night, today he’s feeling it too, so today we’re going to relax. This would be so much easier without interruptions, that’s the main reason why he wants to walk out of here and go somewhere secluded, so we won’t be interrupted.

He wants to rest so we’re going to stop here, Kiddo, if we can write later we will.

Have a good day, Sweethearts, and be safe.