I returned home a few minutes ago and wanted to write about something that I had thought of while at work tonight, or last night, depending on how you look at it. But before I start I just want to say “Hi, Kiddo”, and that I miss you. With the important said, let me begin.

Antagonist : (biochemistry) : “a substance that interferes with or inhibits the physiological action of another.” – Google

Inhibit : “make (someone) self-conscious and unable to act in a relaxed and natural way.” – Google

Physiology : “The branch of biology that deals with the normal functions of living organisms and their parts.” – oxforddictionaries.com

While I was at work, I looked around the shop, and something that I have said several times came to mind. I have said what came to mind in a post to you, and to NASA a while back. What I said referred to “all that metal brought up to the Earth’s surface”, and “all that work it took to get it here”. I myself, think that certain things stick in my mind for a reason, for years even, and although I might not know why at certain times those things are there, it doesn’t change my thinking that they are there for a reason, after all, there is a reason for everything.

And with that reference in my head I began to think why it was sticking with me, why does it pop up from time to time. So with my Equal working, I had time to think about it.

“All that metal brought up to the Earth’s surface”

I thought about that for a while.

Why does that stick in my mind?

Why does it sound somewhat attractive to me?

“all that work it took to get it here”

And after some thinking it dawned upon me.

People, thousands of years ago, didn’t have the metals that we have today, such as carbon steel and Iron, they had Copper and Bronze, which replaced their stone tools in the era known as “The Bronze Age”.

The Bronze Age was a period of time between the Stone Age and the Iron Age when bronze was used widely to make tools, weapons, and other implements. Bronze is made when copper is heated and mixed with tin, creating a stronger metal than copper.

When I say “love birds” I do not say it with sarcasm, just to be clear.

And at that time of Zeus and Hera, about 3,600 years ago, something else also existed ;

Nibiru. Also known as “Planet X”. Nibiru’s orbit around our Sun is 3,600 years, and with it comes other planets, but Nibiru is the one to focus on. It is now 3,600 years after Zeus and Hera, and guess who’s back?

The news stations aren’t talking much about it due to “Big Brother”, but there are a lot of people using the internet to spread the word with photos, film, and facts because they feel that something bad is going to happen soon, something that the governments of this planet cannot stop. But they don’t know exactly what will happen. And that is why this is being kept “hush-hush”.

Nibiru is basically a giant ball of solid Iron, about 8 times bigger than the Earth, and it possesses an enormous magnetic field. Nibiru’s magnetic field has a radius of .73 billion miles, roughly. It’s magnetic field is so strong that it is affecting our Sun. Nibiru is pulling on the Sun, and people have captured photos and video proving this, and they posted them to Youtube.

All that metal brought up to the Earth’s surface

There is a possibility that, if Nibiru comes close enough to planet Earth, it will rip all the metal off of the Earth’s surface. Now, not all metal obeys magnetism, such as Aluminum, Copper, Bronze, etc., but that is only under normal conditions. If the magnetic pull is strong enough, those metals will also obey the field just as steel and Iron will. If the magnetic pull is strong enough, people will also obey that magnetic field.

Gravity is simply a magnetic field that holds us to this planet. Although gravity can be weakened by scientific methods, gravity is always here, as long as the Earth’s engine continues to produce magnetism through electricity created by friction. Ever rub an inflated balloon against your hair then stick it to the ceiling above you? Same concept. Friction can produce electricity, and electricity can produce a magnetic field. People might think that they don’t obey magnetism, that only Ferrous metals do, but since gravity is magnetism, everything on this planet obeys a magnetic field. Under normal operating conditions. The photo above shows people disobeying the magnetic field, gravity, in an “anti-gravity chamber”, which is not normal. People aren’t supposed to “float around”, if they were, they would have no need for feet and legs, correct?

Let’s say that Nibiru only rips up all the metal on this planet, that metal meaning everything that has metal in it, no matter where it is, or how far down into the Earth it is, like a bunker miles deep. Can you imagine just what that would look like, Kiddo? Nuclear submarines flying out of the oceans, guns being torn out of hands, power generators exploding as they are pulled out of the ground, and that is beside the obvious things, such as cars, trucks, motorcycles, bicycles, skateboards, ocean liners, sunken ocean liners, airplanes, buildings, sign posts, cellphones, computers, silverware, pennies, operating tables, power tools, tanks, aircraft carriers, jewelry, anything with metal in it. Even the pins in a fractured leg. Ouch.

Now can you imagine everything being ripped off of this planet? I can. Maybe Nibiru came a little too close to this planet once ;

Some think that Mars was inhabited once. Maybe it was. Maybe those craters that you see aren’t craters, maybe they are holes from where cities once were, before they were torn from the surface. Anything is possible.

With all the talk online about Nibiru, not one person has mentioned this very possible scenario, and that bothers me, after all, they have been watching Nibiru for years, I just woke up. The “Nibiru watchers” know that Nibiru is giant magnet, and that it is soon to pass by Earth. Don’t they know that magnets attract metal?

As far as Nibiru crashing into the Earth, that will not happen, at least not for now anyway. Both planets are set on a track by a thought. The only way to change their track is to change the thought.

I need to wait and see what happens next with our giant “Roomba”, there are a few channels on Youtube that have been providing accurate information, which is more than I can say for NASA.

I miss you, Kiddo.

In the meantime, be safe, and have a magnificent day. 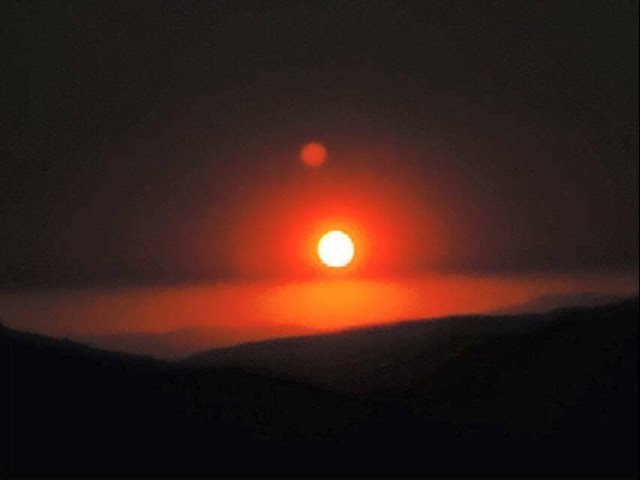