Hey, Sweetheart, I just got home from work and I felt liking writing a little something, and the little something that I am going to write about, or, tell you about, involves my work, revolving around my crew of 3, my crew of 3 kids. But calling them kids doesn’t feel right to me, even though the youngest is 21 years old. So I will call them my “pups”.

And for the purpose of keeping anonymity I will give them each a name. Their names will be “Shadow” (the oldest), “Bandit” (the second oldest), and “Little Bear” (the youngest). Since becoming the lead man my responsibilities have increased, not only as being their leader, but in being a human being. Before I was “one of the boys”, and now I am someone that they not only look to for work directives, but for life guidance as well.

If I had an assistant, it would be Shadow. Shadow is my eyes and ears when I am elsewhere, and I didn’t ask him to be, he just took on that role. He is a very good worker, and takes pride in his work, whether it is welding or grinding. Seeing that he has a genuine interest in my field, I give him tips and tricks that the common weldor wouldn’t know, along with facts regarding metal. I once told him that I can weld a piece of Aluminum to a piece of Stainless Steel, something thought by many to be impossible. I need to show him one day, whenever we have the time.

Last Friday Shadow disappeared for almost 30 minutes. He is consistent, meaning that he is usually where he needs to be, so when I didn’t see him for that length of time I became concerned. So I began to look for him, everywhere. I found him in the office waiting for blueprints to be printed, and seeing that he was okay, I returned to what I was doing. When he came back to where he was, I told him, and Little Bear, that if either one was going to be more than 10 minutes absent from the floor to let me know, so I am not walking around the shop looking for a lifeless body lying on the floor. I have seen people get seriously injured in the workplace, some were injured so bad that they have never returned to work, and I wouldn’t want that for any of my pups. He understood me, and so did Little Bear, Bandit had the night off, so he didn’t get to hear my “riot act”. Later on Little Bear had told me that he thought Shadow was going to cry while I was telling him my concern. In hindsight I might have looked like this to him ; 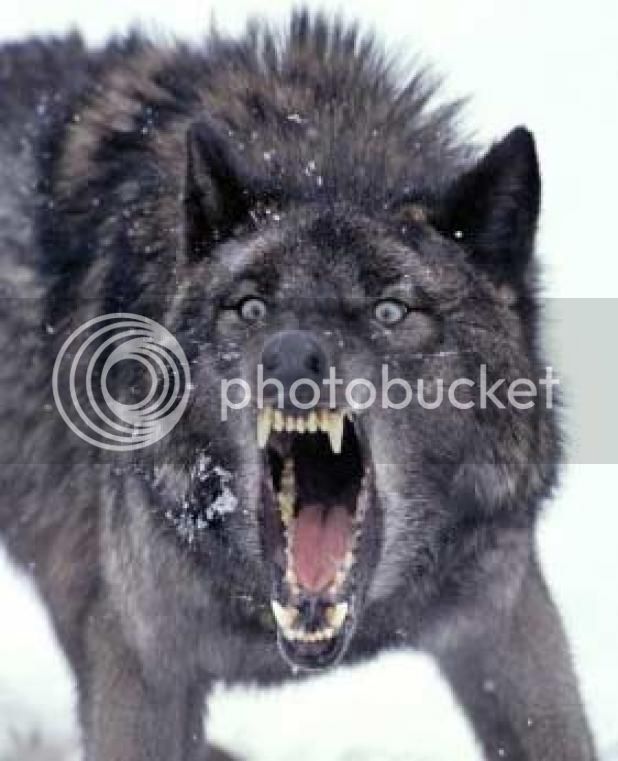 Afterwards it was business as usual, and he not only had seen but felt that I was only looking out for him, just as I look out for the other 2. My priority at work is not getting the job done, it is keeping the people who work with me safe. The work always gets done, and it gets done because the people are safe in that environment. I don’t see myself as the wolf in the photo above, I feel more like the wolf in the photo below, thanks to Shadow ;

Bandit is the wild one. If you ever met Bandit, Kiddo, you would say “This guy’s crazy!!”. Bandit might be the fastest weldor I have ever seen. When I build parts for him to weld I am working as fast as I can to keep up with him. He too, is a very good worker, and also takes pride in his work, even when it is something that he does not want to do. He’ll whine about it for a minute, but that is only because he is human, and a young one at that. We all do things that we don’t want to do, but sometimes those things need to be done.

I gave him a ride home last night, being that he is without a vehicle at the moment, and during that ride we talked about the “riot act”, since Little Bear had told him about it. He understands where I am coming from, and appreciates my prioritizing. When he first came on board we had our doubts about him, being young and a “party-er”, and that came about when he came in a bit leftover from the night before. A few weeks after that I had a talk with him about it, and explained why he mustn’t do that again. He said that he understood, and he hasn’t come in like that since. In hindsight?

Possibly. It’s my firm approach that causes that appearance, and my voice doesn’t help either. At least that is what I think. Bandit is a good pup, nonetheless, a little wild but we are all wild in our own way. I will be giving him a ride home tonight, and possibly Wednesday night, too. I don’t mind, he doesn’t live that far away from me, and his home is on the way. I don’t know if Bandit had seen me like the wolf above when I had that talk with him, but from what I gather now from his joking with me I think that he sees me like the wolf below ;

Little Bear is the handful. He is the youngest of the 3, and the most rebellious. However, he is not rebellious in the sense of being insubordinate, he does what he needs to do regarding work directives, and he does them quite well. He is rebellious in this sense ;

He cannot put his cellphone down, and keep it down for more than 10 minutes. I wouldn’t have an issue with this if it weren’t for the fact that the other 2 are carrying him throughout the night, and being that Little Bear is not a small person, I’m sure that he is weighing rather heavy upon their shoulders. Last night he was given a task that he should have completed on his own, with time to spare. Halfway into the night I put Shadow and Bandit on that same task to ensure that the task would be completed by the end of our shift, for that task was a “rush job”. They succeeded. I know that task could have been accomplished by Little Bear all by himself, if it weren’t for his cellphone.

Last week there was a Stainless Steel water-controlling gate that needed special attention. After the gate was welded it was found with a warp in it, a bad one, it looked like a “Pringle potato chip”. I knew that I could correct it using intense heat applied to certain areas of the gate, and to do so I needed a hand, so I had Little Bear assist me. While I was doing what I needed to do, he watched and asked me many questions about what I was doing. Not many metal workers know how to “heat camber” correctly, so when one witnesses it being done correctly it is wise for them to ask questions. During that time I found myself watching his facial expressions as he witnessed metal doing something that he hadn’t seen before, and that made me feel good, to see a young mind intrigued. He’s not a bad kid, just young, and perhaps a little nervous being new to this field, and because of that I don’t want him seeing me like this ;

Young minds are very impressionable, and I don’t want to give a wrong impression, especially over a cellphone. Damn cellphones.

This is a short work-week for us, so I am going to run it out without confrontation before “Thanksgiving” Day. And being that it is a short work-week the shop is in utter chaos trying to fulfill our customers’ needs before “Turkey Day”. At one point last night I had all 3 of them incessantly calling for me to help them with something or other, and all I could hear was the cartoon “Charlie the Unicorn”. Ever see that cartoon, Kiddo?

Anyway, I thought to share the pups with you, they have a lot of potential in my field if they pay attention. The funny thing is, Kiddo, I wasn’t looking for the position of lead man, but when the original lead man left, someone told me to accept that position so we wouldn’t have someone incompetent taking his place. I miss the original lead man, he was very good to us, and I can only hope that he is doing well, just as I hope that you are doing well.

As for myself, I will keep an eye on those pups,

after all, someone needs to keep them safe when they are far from home.

Time for bed. Have yourself a magnificent day, Kiddo, and be safe.