I did not read it fully, but I didn’t need to. NASA has been wrong about a lot of things, and one of those things regards the Earth’s core. They claim that the Earth’s core consists of 2 cores, one being a solid and the other being a liquid, with the solid core being inside the liquid core. The obvious mistake about this claim is that what NASA claims to be is impossible. Here, a diagram ; 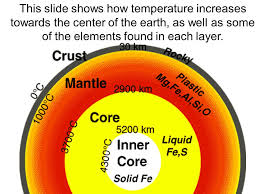 Do you see what is wrong with this idea? If the center-most core is a solid, Iron, how can it remain a solid, and hotter, inside the molten liquid core, which is also Iron? Both of those cores would need to be one or the other. Think of it like this; try to imagine an ice cube remaining an ice cube inside a pot of boiling water.

One or the other. For the core to be a liquid, the planet would wobble phenomenally. Also for the core to be a liquid, something would need to be generating a lot of heat to keep the Iron molten. Iron melts at around 2,750 degrees Fahrenheit, and boils off at 5,200 degrees Fahrenheit. If the core was ever molten, it would have cooled off by now. We are in space, and space is quite cold.

NASA also made claims that the Earth’s core has a temperature of 10,800 Fahrenheit.
“A team of scientists has measured the melting point of iron at high precision in a laboratory, and then drew from that result to calculate the temperature at the boundary of Earth’s inner and outer core — now estimated at 6,000 C(about 10,800 F). That’s as hot as the surface of the sun.Apr 25, 2013″

http://www.livescience.com/29054-earth–core-hotter.html
Do you see something wrong here?
By now, the Earth’s core would be a gas.
So what is the Earth’s core?
A solid. But not just a solid . . .

The Earth’s core is a magnetic, Iron sphere.
This is the most simplest, economical engine ever possible. Or, ever imagined.
Let’s cut to the chase. The universe is here from a single thought. Inside that thought was chaos, all sorts of good things flying around in Space, and introduced into this Space was a magnetic sphere. The sphere is powered by another thought, to continually rotate and orbit around the Sun. No matter what scientists theorize on how the Earth rotates and revolves around the Sun, no explanation can explain Factually how it keeps doing what it is doing.
So we have this giant, magnetic Iron sphere rotating on its axis in the middle of chaos. As it rotates, it begin to collect matter from all the chaos around it, think of it as an enormous “Roomba”. As the matter collected on the surface of the sphere, it began to form a skin. Eventually, the skin became so heavy that it began to slip around the sphere, breaking up and crushing itself for possibly a billion years or so. While the skin was destroying itself, it created a fluid, and being that fluids like to find the lowest plane possible, that fluid collected around the sphere. That fluid is what people call today “crude oil”.
The fluid found itself a purpose in all this mess, it became a lubricant for the skin, or, mantle, to slide smoothly over the sphere, which is spinning faster than the Earth is rotating. After billions of years the mantle “settled”. It “smoothed out”. With the mantle settled, life was able to begin on the Earth’s surface, after all, you cannot raise a family with the ground constantly shaking beneath your feet now, can you? Of course not.
Now for the ice caps. If you look at the Earth’s rotation, you will see that only the North and South pole have ice. They have ice because there is less heat there. There is less heat there because there is less friction at those two points. If you were to hold a rubber ball between thumb and forefinger, and rotated it with the use of your other hand, you would see, and feel, that the two points held captive barely rotate. They are rotating, but not as fast as the outer diameter of the rubber ball is. Remember, underneath the mantle is a spinning sphere, it has more surface contact at its outermost diameter underneath the mantle than it does at the North pole and South pole. Ever notice how warm it is at the equator? Ever notice that most earthquakes happen around the equator? There is a reason for that.
Scientists, some scientists, believe that the reason why there is ice at those two poles is because they are furthest from the Sun, geographically. The Sun does not heat the planet, the core does. The light from the Sun simply aids in providing an adaptable atmosphere.
Most people believe that those trees the Sun helps grow are responsible for the oxygen in our atmosphere. They are only roughly 20% responsible for the oxygen we need to live, the other 80% or so comes from . . .

the ocean.
“Scientists agree that there’s oxygen from ocean plants in every breath we take. Most of this oxygen comes from tiny ocean plants – called phytoplankton – that live near the water’s surface and drift with the currents. Like all plants, they photosynthesize – that is, they use sunlight and carbon dioxide to make food. A byproduct of photosynthesis is oxygen. Scientists believe that phytoplankton contribute between 50 to 85 percent of the oxygen in Earth’s atmosphere. They aren’t sure because it’s a tough thing to calculate. In the lab, scientists can determine how much oxygen is produced by a single phytoplankton cell. The hard part is figuring out the total number of these microscopic plants throughout Earth’s oceans. Phytoplankton wax and wane with the seasons. Phytoplankton blooms happen in spring when there’s more available light and nutrients.”

“In April, 2013, NASA’s Aqua satellite captured this true-color image of the dynamic growth of a springtime phytoplankton bloom in the Bay of Biscay, off the coast of France.”

You could learn more here ; http://earthsky.org/earth/how-much-do-oceans-add-to-worlds-oxygen

If the mantle should ever “freeze” onto the sphere, life on this planet would end. Think of a gasoline engine “spinning a bearing”, same principle.

It’s a good thing no one has taken that fluid, or, crude oil out of the ground, because I need to tell you, it would be a bad idea if they did.

It was taken out, wasn’t it?

Well maybe they didn’t take too much of it.

“In 2005, The Oil Depletion Analysis Centre (ODAC) in London provided a total figure of almost 1 trillion barrels of crude oil (944 billion barrels) since commercial drilling began. Even that figure does not add up.”

How do you replace 1 trillion barrels of crude oil?

Good thing Daddio is on the job, eh, Kiddo?